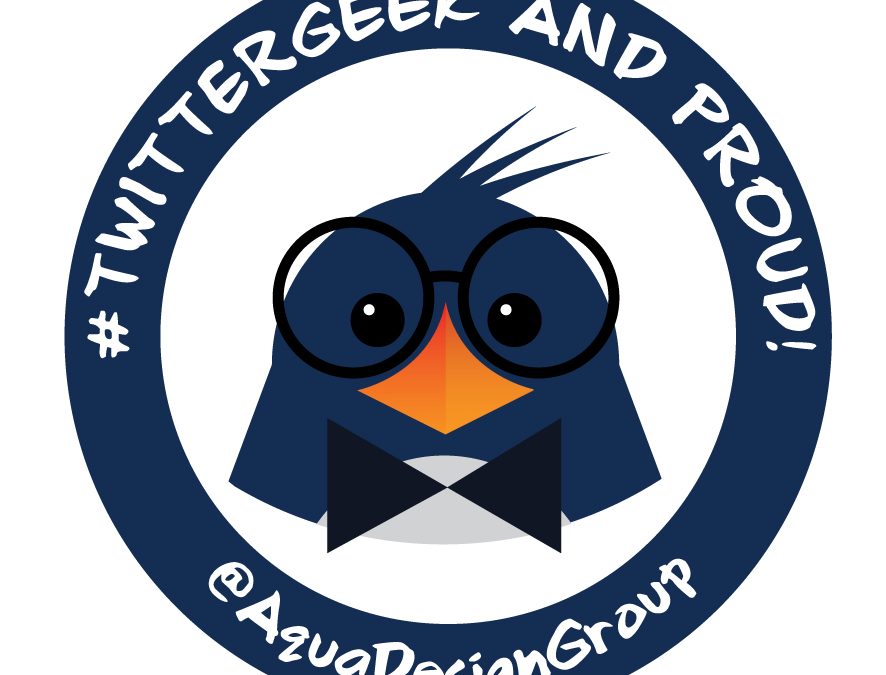 As with most things there is a beginning and in my case it was off the back of a 1-2-1 conversation with a LinkedIn connection Becs McNeill in 2009, we arranged to meet for a coffee and during the conversation Becs suggested I get an account set-up on Twitter for the business.

The beginning
So set-up @AquaDesignGroup on Twitter and I’ll be the first to admit it took some time to find my feet on Twitter, the 140 character restriction and what content to post. This was before the business got a smart phone too, so purely tweeting off the browser.

I decided to spend a solid weekend on there about 6 months in to get the lay of the land, see what was going on and find my style of tweeting. Far too many businesses in my industry go for the ‘offer’ style posts and that’s never been what the business is about, so opted for a more informative post style based around recent work and doing more general posts about what services and products I offer.

The starting gun
Through a chance glancing of a post on Twitter I found out about the @TheoPaphitis #SBS (Small Business Sunday) competition and decided I might as well get involved, what had I got to loose. By this point I’d started to get work via Twitter and was getting in a good groove. So after four and a half months of tweeting, missing a few due to family commitments and on occasion completely forgetting on 5:04pm on 16th October 2011 I sent my entry tweet off to Theo.

This was an odd Sunday and just on spec I decided to put the computer on and check emails, that’s when the fun began. A stream of notifcation emails about tweets came streaming in, crashed Mail twice and kept on coming. So decided to logon to Twitter and see what had happened and found out I had won #SBS.

This proved to be a significant starting gun for the business on Twitter, over 400 follows and was on Twitter until after midnight replying to tweets. Off the back of this I decided to join a small group of winners producing their own versions of winners badges, as at the time there wasn’t an official badge. This led to even more introductions from within the group of past winners.

A few months went past and just like #SBS, found about @Jacqueline_Gold #MOM (Men on Monday) which was the Male version of her #WOW competition (Women on Wedneday), strangely this was from Jacqueline herself as had followed her when I first joined. So took part on the next competition day and to my surprise won on the first try. Her winner badges had already been designed, but no one was producing anything for winners to show off their wins for #WOW or #MOM, so decided to tweet Jacqueline a certificate design and it was met very favourably.

By this point I’d started to get interest from #SBS winners about working with me, which was fantastic.

Throughout 2012 and 2013 I also won a variety of smaller awards from @PurpleDogNet #purplebiz, @SmartSocialUK #SmartSocial, @GreatBizAwards #BizPromotion and #DSFOTD which all in their own way built up my follower base and increased other businesses awareness of what I could do. @PurpleDogNet also offered Sponsorship days, so took part in that too.

The regal touch
It’s funny how an idea comes about. There I was having lunch downstairs and put on BBC and there was Diamond Jubilee celebrations talking place on the Thames. Then it struck me, why not run a competiton on Twitter celebrating women in business throughout the Jubilee year, so a few days later designed a range of badges and starting tweeting about it and so began the #QueenOf competition on Twitter in 2012. By this point the sole Twitter account was up to around 10,000 followers.

What’s happening now
Well, a few years have now passed since the #SBS #MOM wins and introduction of my #QueenOf and #KingOf day competions, there have been some bumps on Twitter caused by issues within certain networks but thankfully that was a blip. From a business perspective the business is at a respectable follower number of over 41,000 across the various accounts it now has @AquaDesignGroup @ADG_IQ @ADG_Moore which has opened many new doors for me and the business and it’s exciting to see what’s on the horizon for the business.