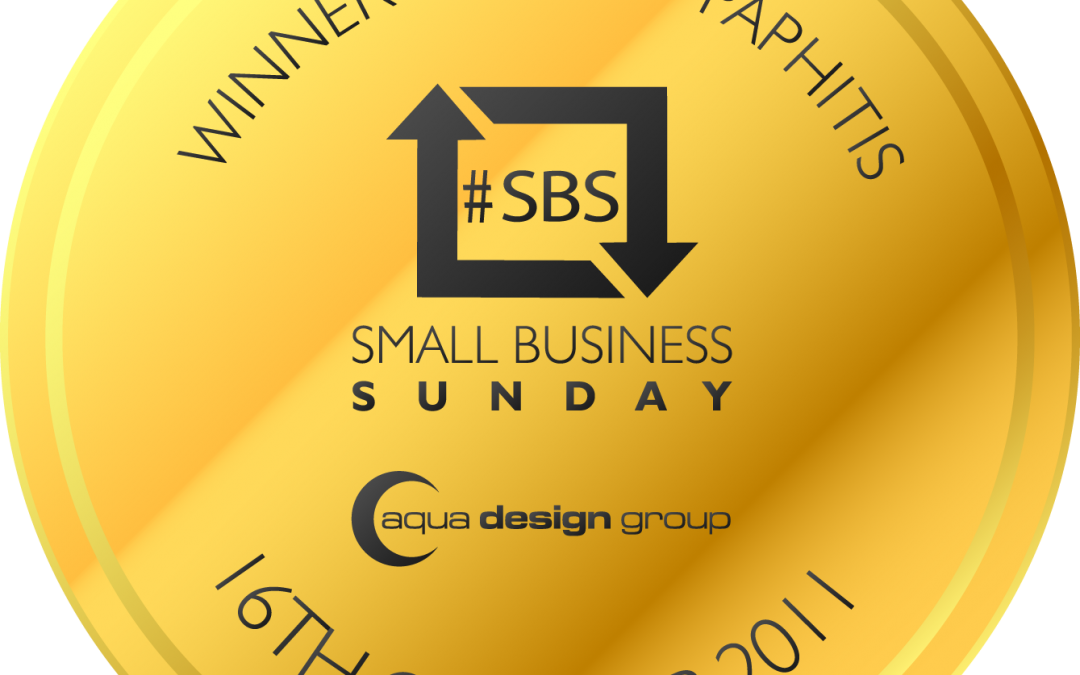 This year marks the businesses 4th year as an #SBS winner!

What a 4 years it’s been too… was told about the competition on Twitter by Louise Barson at @silverconcierge and so my #SBS tweet journey began. Entering each week (missing the occasion week) due to family stuff and then continuing as long as I remembered (before the joys of a smart phone in my life). The business by this point had a healthy 1,200 following on the one account @AquaDesignGroup.

Posted my #SBS tweet at 5:05pm on Sunday 16th October 2011 and went on with my Sunday night, went back to the computer and logged on to email about 8.30pm and my email updates went on meltdown and that was just the start of the fun for the night. Logged on to Twitter and it was equally as manic, whilst trying to contain myself from jumping all over the house (oh wait I did do that).

After thanking Mr. P and saying hello, following and generaly chatting to as many people as I could by midnight I was totally whipped out, called it a night and well come the morning it started all over again and remained that way for a solid two days. Thankfully a very nice #SBS winner @SilverBirchBags phoned me up and emailed her press release and a clip of a newspaper feature which was a real help as I missed the boat a bit when getting press attention as was far more concerned about being social on social media and getting to know fellow winners.

There were a few winners already doing their own style of #SBS winners badge and decided to add my input and do my own style. This has evolved over time to the badge you see now.

The first event was an interesting one, firstly as was asked last minute to produce the winners certificate design for the 500 plus winners attending the event (presently being nicely displayed on the slider on the winners website www.theopaphitissbs.com ). Was one fo the first winners to get on the first version of the winners website and to top it all got a mention by Mr. P at the event too. Met loads of winners, got a photo with Theo and was on a high all day, was also my bithday too … was having a VERY good day.

Have been lucky enough to both work with fellow winners and be recommeneded too. Just by other winners seeing the work the exposure can have a positive impact, granted that does help if winners are following, chatting and generally networking anyway. The first project I was ever asked to do was some branding and stationery design for a Scottish winner @ClunyBankHotel and am thrilled with to see what they’ve been doing with it within the business. Worked with #SBS Trophy maker @LRBTrophies on a few of my own projects and have been lucky to say that more than a few winners have become firm friends.

This was the first Twitter win the business was awarded on Twitter, but was by far the last and at every stage the follower numbers kept on increasing to what is a healthy 14,400 followers on Twitter on the main account @AquaDesignGroup. This also brought rise to another account being created for the business a year after my win which was Andy Quinn @ADG_IQ, this cheeky chap also had a very quick uptake of followers too and helps the business with additional promo, competitions and as much as possible advice on design and print. Helps that he recently passed 8,000 followers with the other networking activity the business does on Twitter.

Well, as they say it’s not been written so can’t really be sure but needless to say that despite some recent issues the business will continue to support the competition and fellow winners.